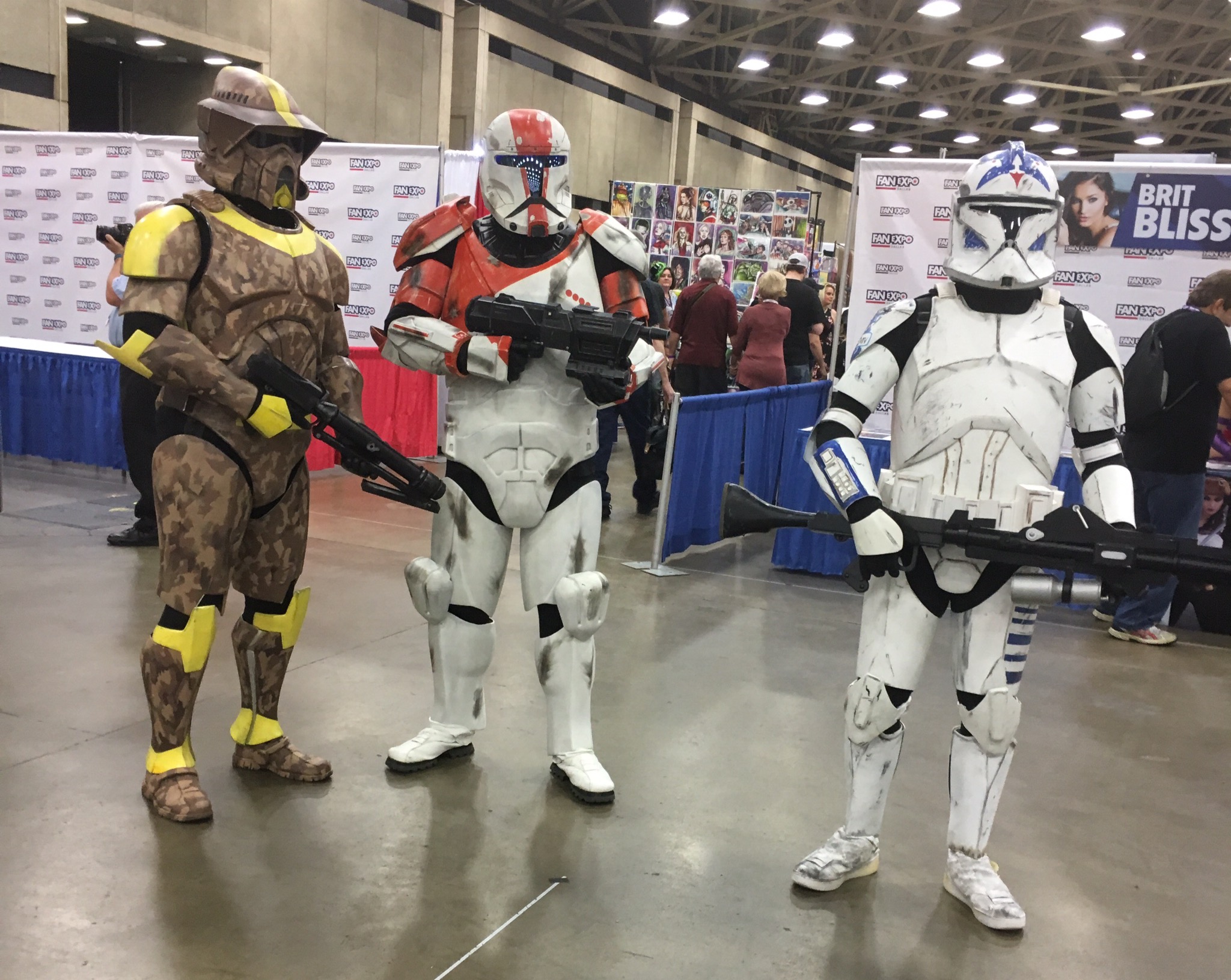 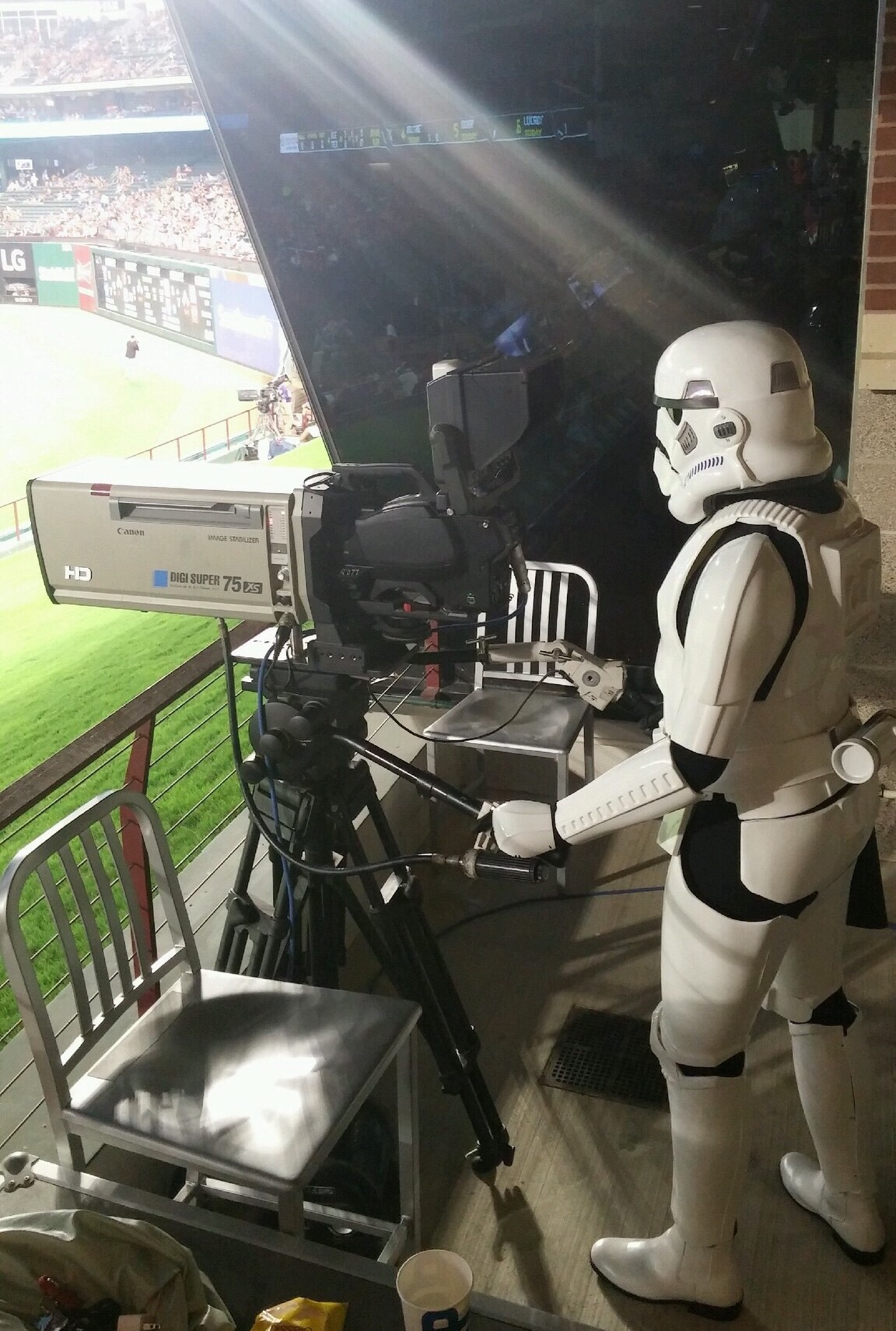 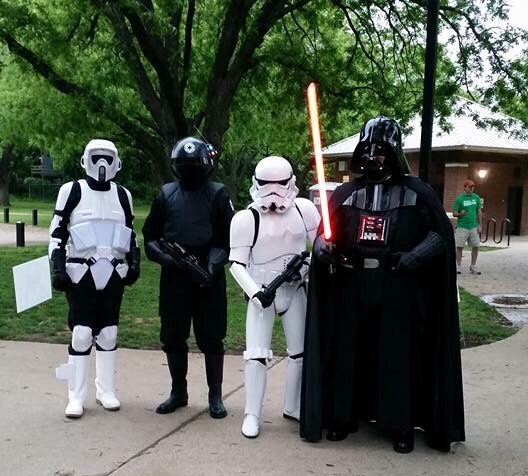 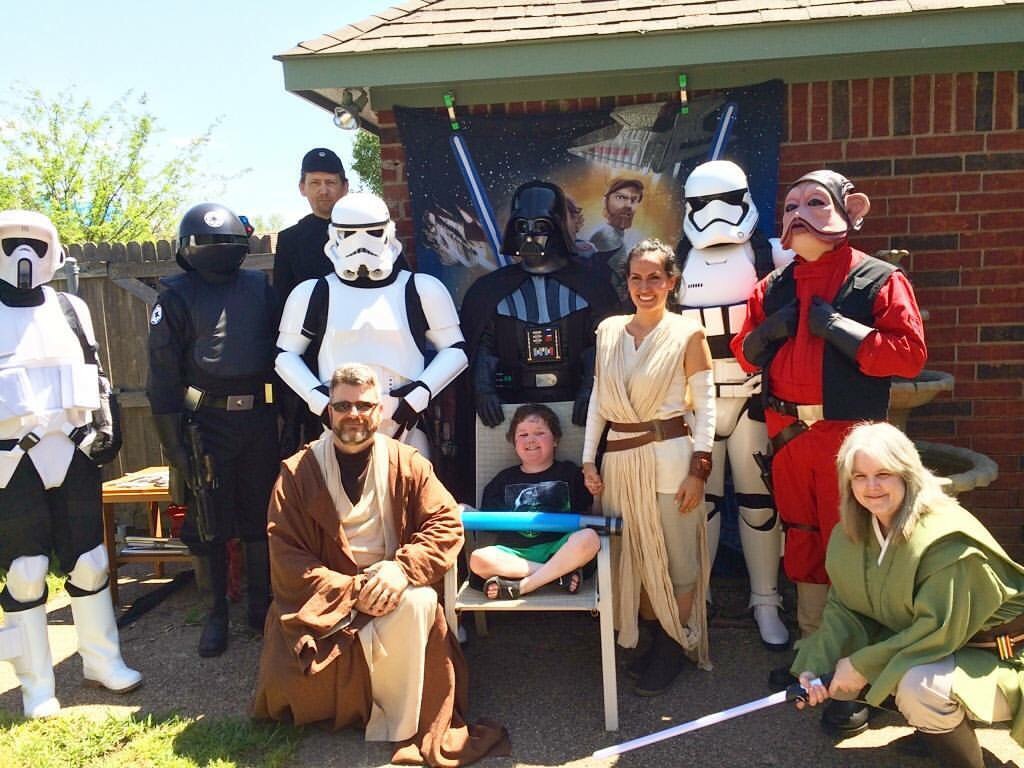 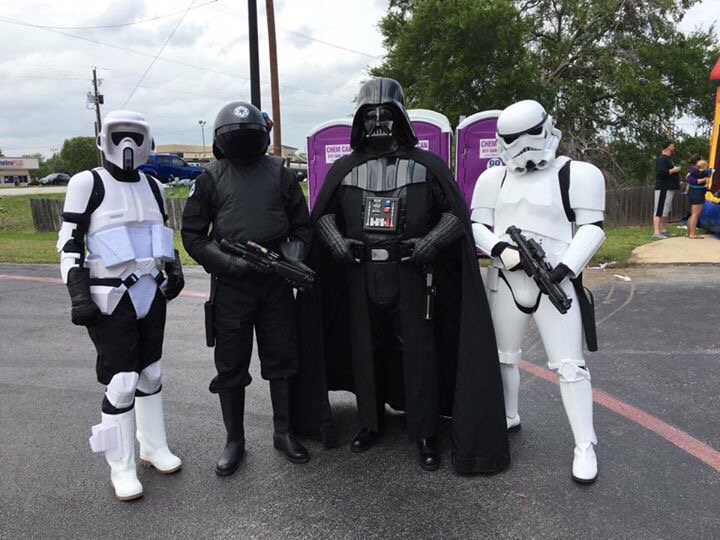 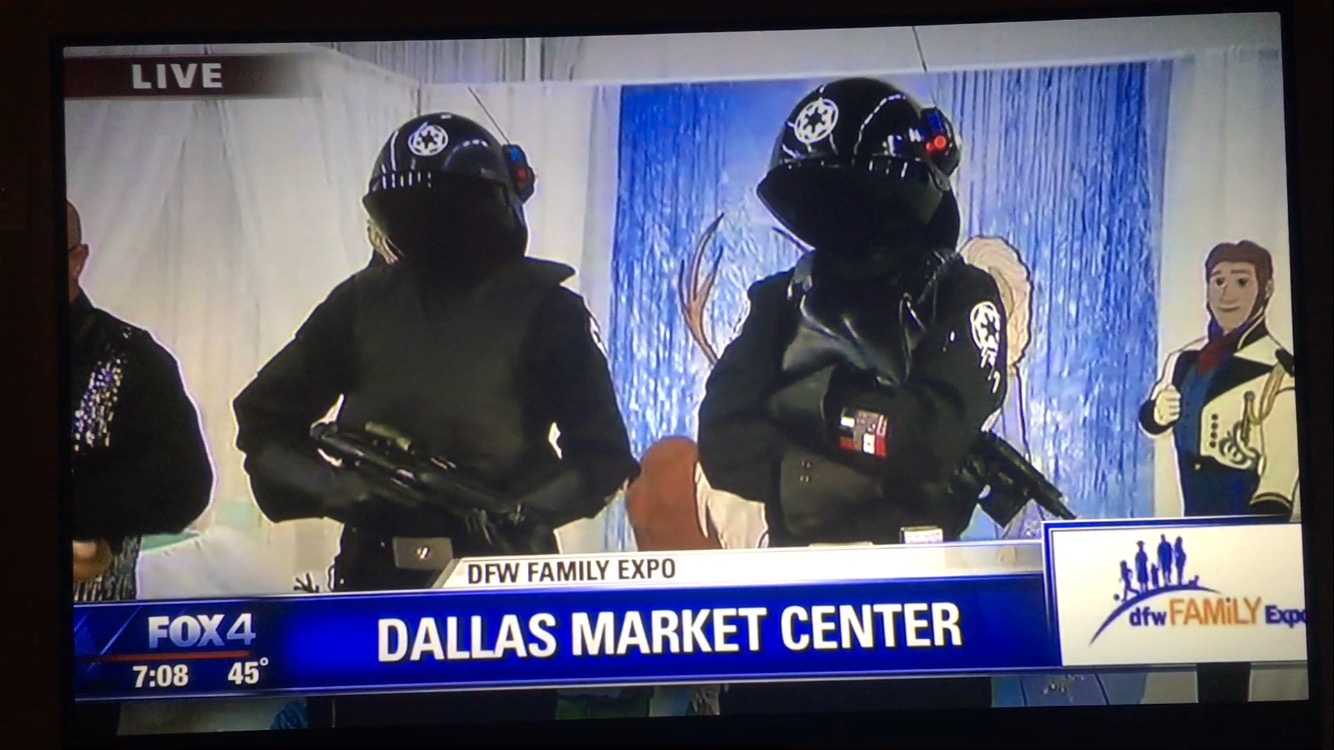 I originally reviewed the Arbiter mini bust in April 2011 on HaloCollectors.com. To date it is still one of my favorite pieces in my collection because he’s one of my favorite characters, and Gentle Giant makes fantastic collectibles. Below are the images from the original review, as well as some of the text from the review. There are some excerpts missing that were lost because of data corruption, but the majority is still available. Note that the sections in brackets [ ] have been added to replace missing sections from the original review. You can also click on each image for a larger view.  With that said, here we go:

It has been a long time since we’ve been able to look at a Halo offering from Gentle Giant. The original piece was the Master Chief mini bust (repainted also in Red, Blue, and Steel), followed by a “Classic” scale Master Chief (and pink repaint) as San Diego Comic Con 2009 Exclusives. We got our first glimpse of the Arbiter mini bust way back in February 2008, over 2 years ago. The Arbiter, former enemy of Master Chief and humanity, switched sides in the war between humans and the Covenant when he found out that the Covenant leadership had the intention of exterminating his species, the Elites. With the Arbiter at his side, the Chief was able to push forward and defeat their common enemies, making the Earth safe once again. Most fans of the Halo series see the Arbiter as the second most popular and important character in Halo3, due to his efforts in the war, and the fact that player 2 in co-op Campaign games plays as him. So was the wait for the mini bust worth it? Read on to find out!
CLICK HERE to see the images and excepts from the review!

The box for the Arbiter bust matches the other boxes in the GG Halo line. The front has a window where the bust’s head can be seen, and the name “ARBITER” is on the front and back. The bottom of the box contains the edition number and size. I was surprised to see when I flipped it over for the first time that the edition size for this bust is a mere 300, compared to the 2500 edition size of the Master Chief bust (1300 green, 625 blue, 625 red) and the 600 for the steel Spartan. The box displays nicely if you care about that sort of thing, and the design is in my opinion superior to that of boxes from GG’s other lines. Upon opening the box, the inner packaging is the standard white Styrofoam casing you see with GG’s other products and many other companies’ high end items. The base of the bust it wrapped in a clear plastic, and there are two small cubes that keep the bust from shifting around inside. It is a perfect fit, so I doubt that many (if any) of these arrive to their destinations with any damage. The certificate of authenticity is wrapped in plastic and taped to the top of the inner packaging. Like other COAs from GG products, one side contains the name and a photo of the product, and the other has the name, line, edition size and GG LTD logo. 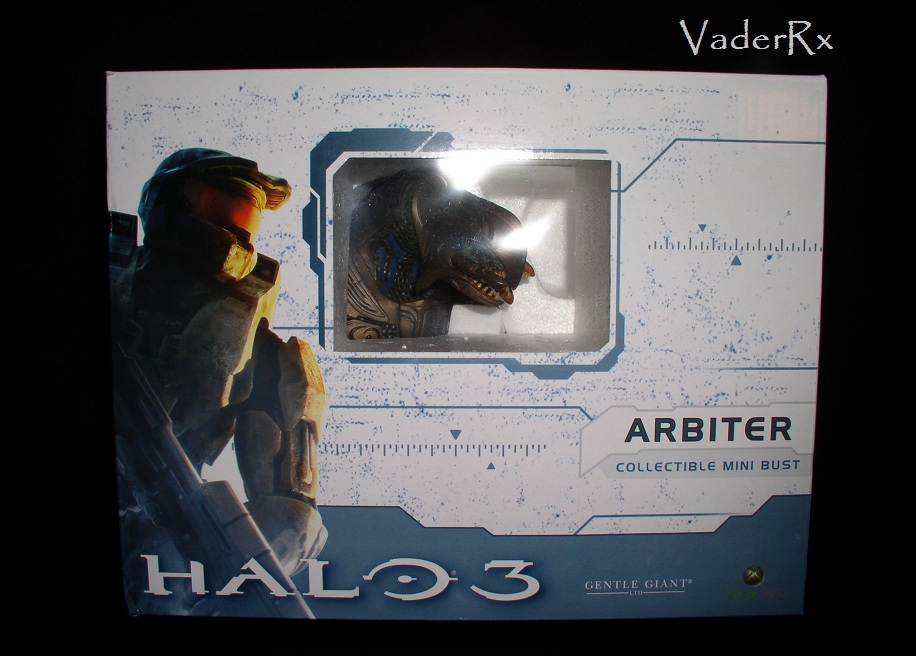 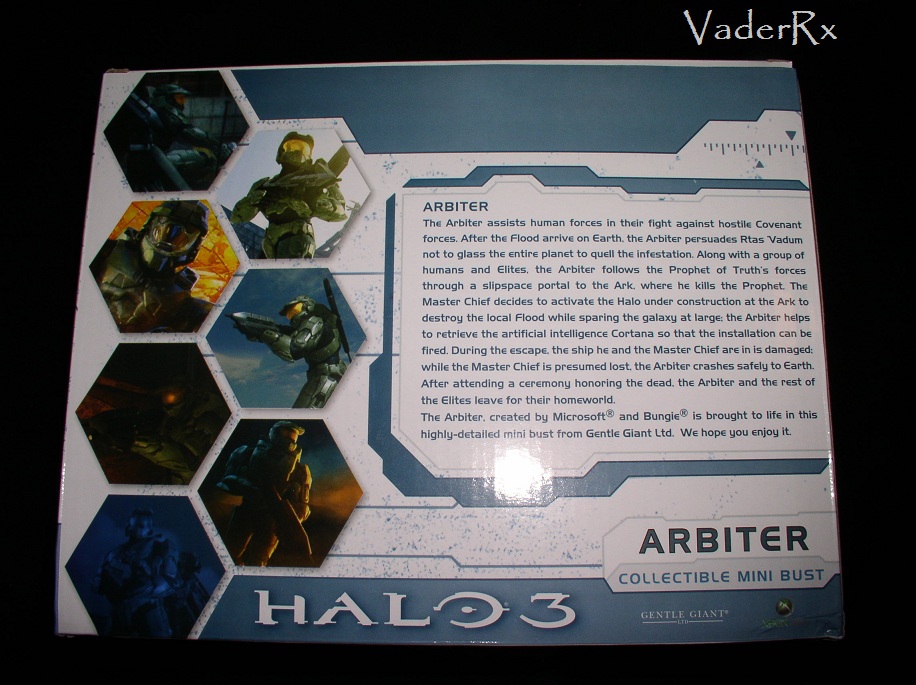 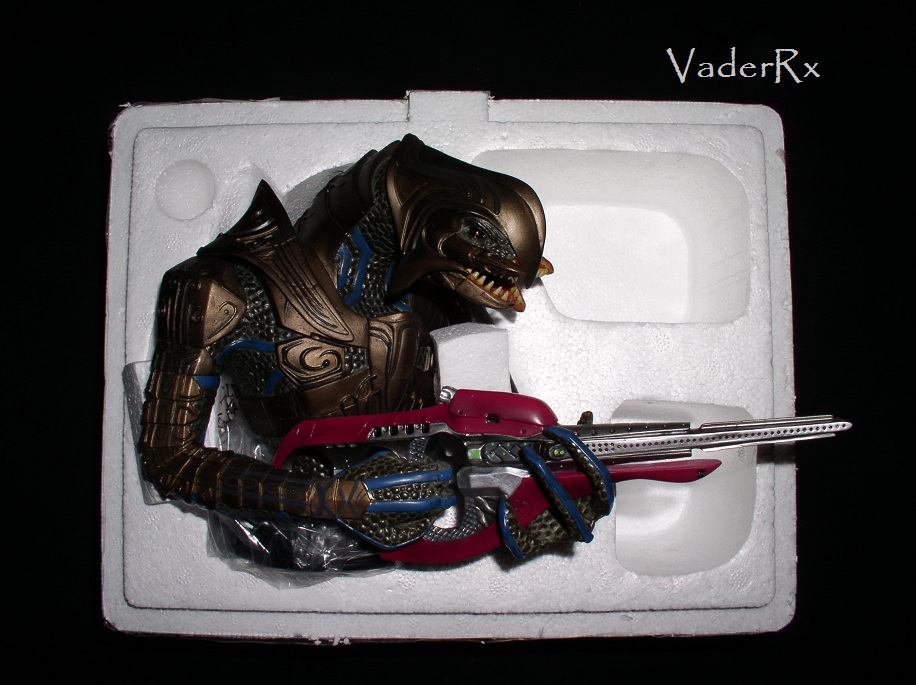 When removing the bust from the packaging for the first time, the first thing I noticed was [the weight of it and how sturdy it felt. The detail that went into the sculpt is evident, and the coloring is appropriate and well-painted. The Arbiter is clutching a Covenant Carbine, which is the precision weapon that he often is armed with in the game.] 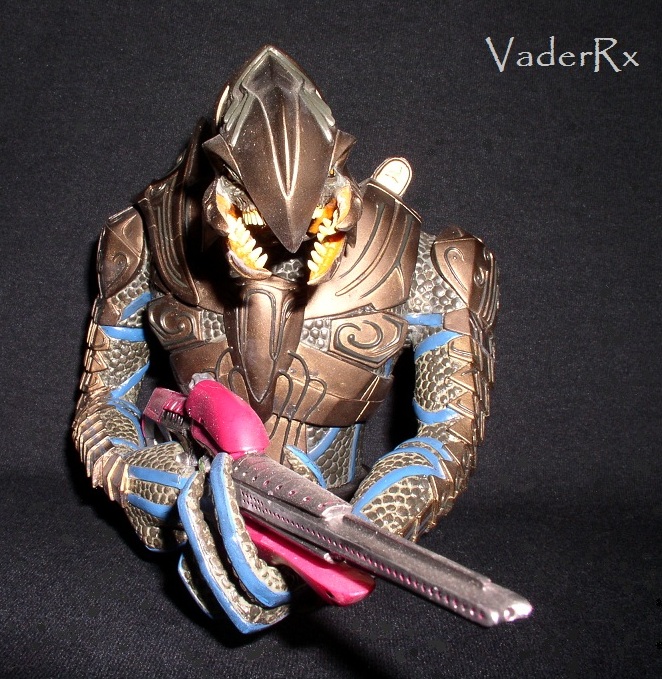 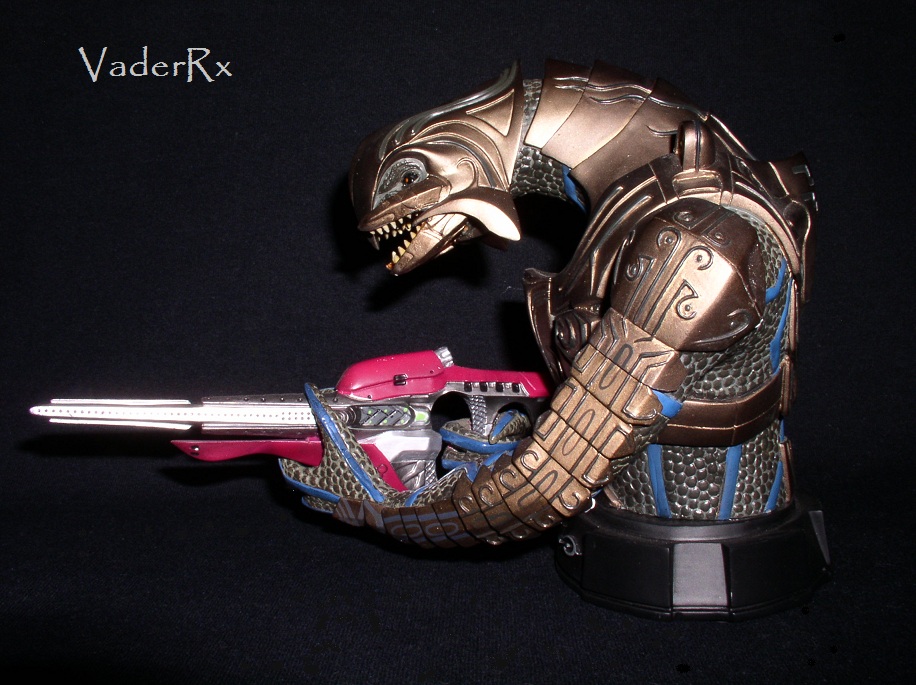 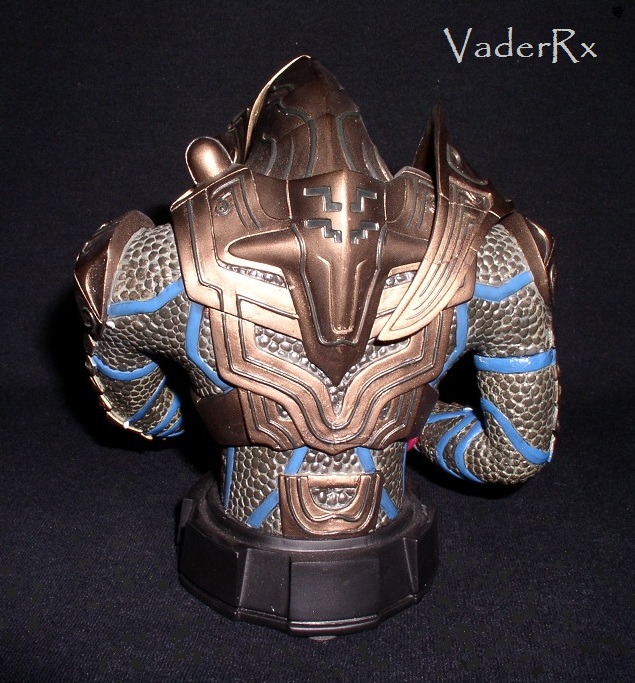 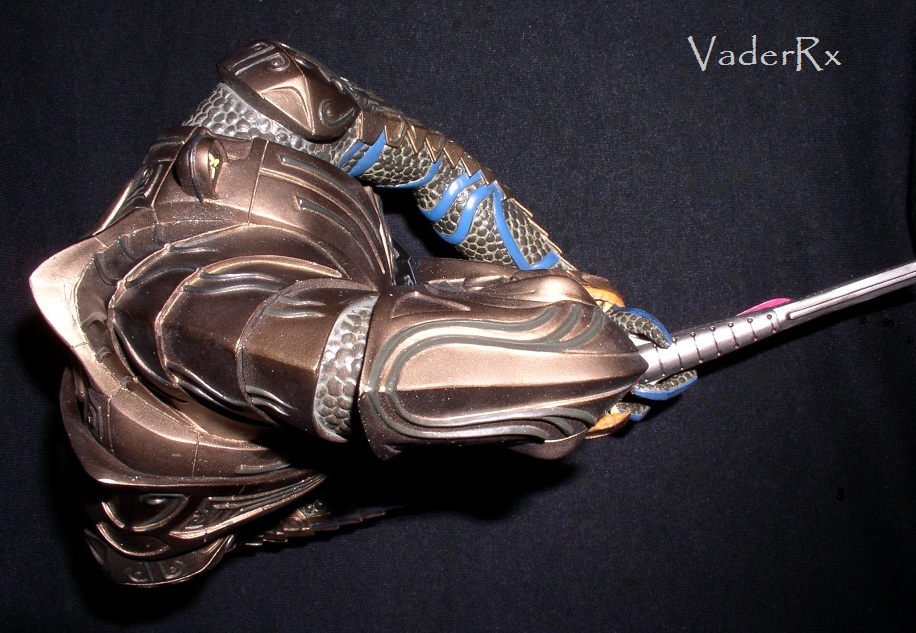 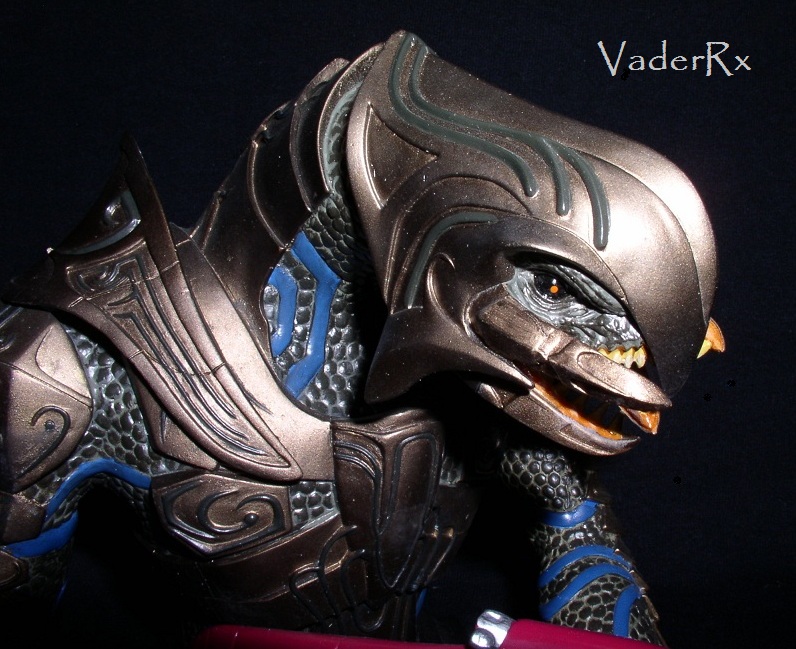 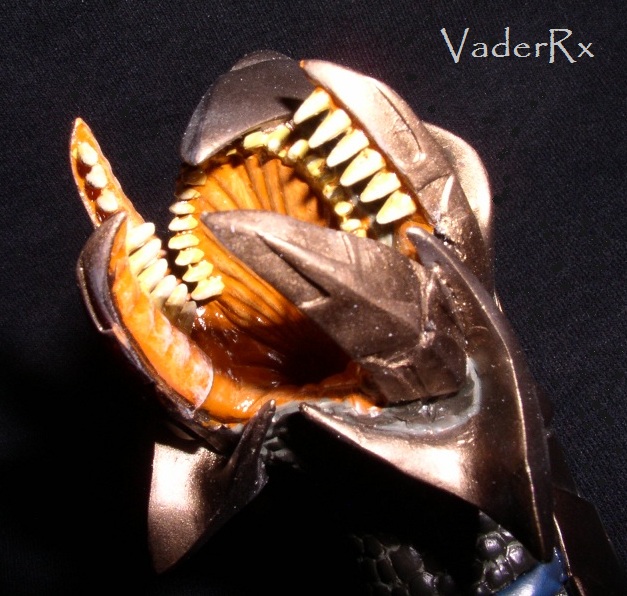 Next, I’ve prepared some in-game pictures of the Arbiter’s armor to compare it with what GG’s interpretation on the bust. When you look at each arm, you can see that nearly every detail on the game model is seen on the bust, from the lines and curves to the patterns. On the shoulder guard that sits at the top of the right arm, identical markings are found as well. The only (what could be considered) major differences are on the back of the bust. The markings on the main top piece are not the same when comparing the bust and the game model. Another difference is that on the bust the top gap on each side where the Arbiter’s skin is showing is not seen as prominently on the game model. Looking at the bottom of the back on the game model, the two curves that are joined by another small curve on each side are not present on the bust. As you can clearly see, though these details are different, without having a side by side comparison picture it is unlikely that anyone would even notice them. Not only are the differences miniscule, but they are also on the back of the bust and won’t even be visible in most displays. Also keep in mind that when sculpting the bust, GG most likely did not use game images, but images given to them by Microsoft to work off of, which can be different than what is seem in the game itself. 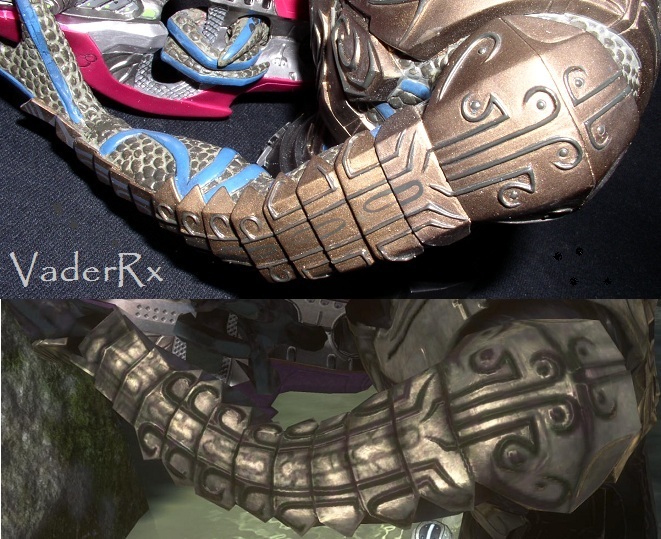 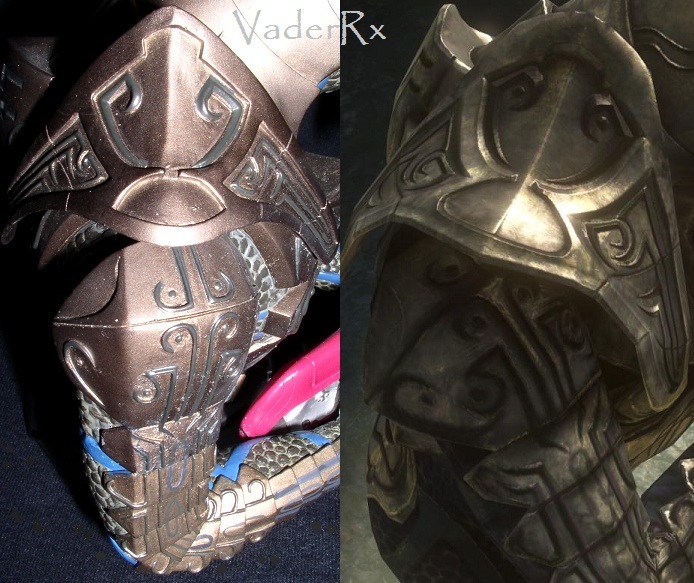 [Below are some additional images, including the bottom of the bust with the stamp and edition number, as well as a side by side comparison with the Master Chief mini bust.] 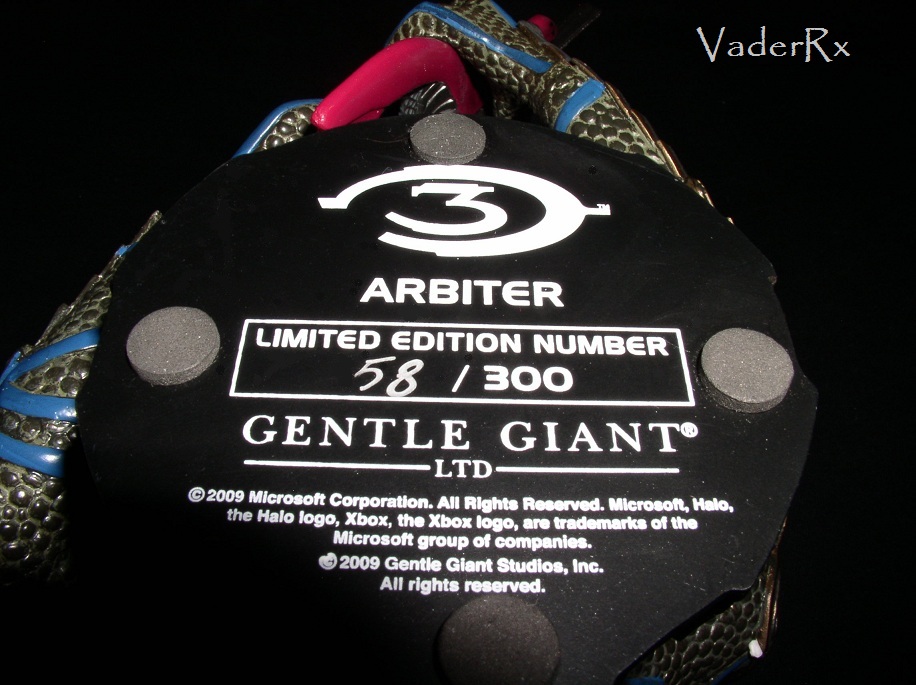 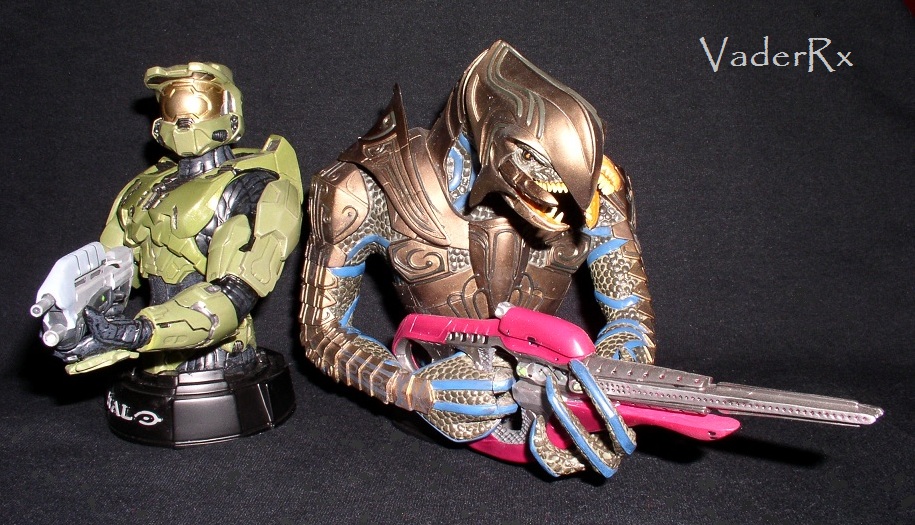 [This bust may be hard to find now due to the low edition size, but if you can find one it will be a worthy addition to anyone’s Halo collection.]
Posted in Halo, Reviews | Tagged Halo, Reviews | Leave a comment